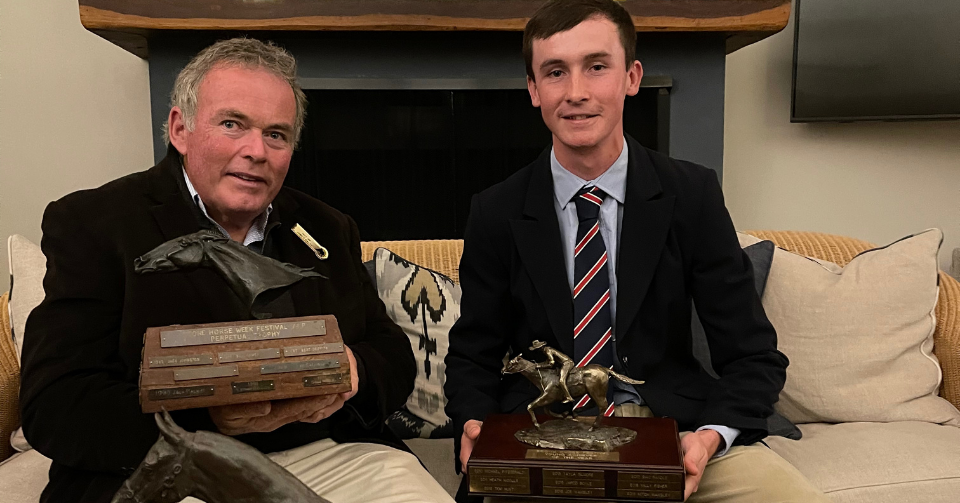 Born in Ireland, James Balfe has always loved horses. ‘Balfe’ is a wonderfully good-humoured person with a quick wit and a kind heart, giving generously to the community. He connects with everyone he comes into contact with.   He trained and has worked as a farrier all over the world – Ireland, UK, US and Australia. He has been heavily involved in the Professional Farriers Association of NSW and is a wonderful mentor to young farriers.  He is a strong announcer and helps out at a variety of events, particularly farrier and show jumping.

Tyler Kelly, age 18, is a talented Equestrian Rider – competing in both Show Riding and Eventing. He started riding at the age of four and progressed through the ranks of Scone Pony Club, doing everything from show riding to camp drafting, sporting, showjumping and eventing.  He pursued a show riding career at a higher level from the age of 7 where he has won at least 18 Royal Show Champion Rider titles.  Tyler recently won the 2020/2021 EA National Show Horse and rider Championships in Werribee, Victoria.  His most memorable win so far would be Grand Champion Rider at the 2017 Grand Nationals.  Over the last three years, Tyler has begun to transition to Eventing in which he competes on a Thoroughbred and a Warmblood. Last year he was the Equestrian NSW Interschool Champion in the 2* Eventing.

Tyler will complete Year 12 at Scone Grammar School this year, having taken a Pathways study program that involves completing Year 11 and 12 over three years to allow time away for competing at

Efficient is a 13-year-old Australian Stock Horse Gelding owned by the Wamsley family.  He has played Polocrosse at a high level for 10 years and is known all over Australia.   Efficient is by Wayerii Prospect and the first foal out of Dimity.  He is named Efficient after the 2007 Melbourne Cup winner because this is the day Dimity visited Prospect.  In his career, he has represented at National Polocrosse level four times, winning Champion horse at three Nationals. During his best season in 2018, he won Champion Horse at the NSW Club Championships, NSW Zone Championships, the Australian Polocrosse Nationals and Champion Open Men’s horse for the Australian Stock Horse Society.